When I was young I would take trips to Reading, Pennsylvania with my parents (this was their hometown). Through out my childhood, these journeys were made to see relatives. Along the back roads I would take note of the landmarks (no tv in cars in those days). One such landmark was a restaurant advertising a smorgasbord. In my mind this conjured up an image of the most amazing spread of food. The somewhat exotic name “smorgasbord” gave me a sense that there was an ethnic connection between the foods. However, in reality the connections may have been minimal.

After posting about breaking records 2014, a certain amount of fear entered into my mind as 2015 approached. Could I live up to the high standards of 2014 and make 2015 even more special? I felt the need for a grand post to introduce this new year. Here I am attempting to offer a pictorial smorgasbord (i.e. variety with the hope of connections). I am seeking to recapture some of the experiences of 2014 and add something new.

Perhaps today was a suitable day to look back. It rained all day, and so I stayed in and worked on a few drawings using adobe illustrator. First I tried to capture the mood of the day.

I also tried my hand at drawing a “recap” that represented 2014. Although I am am not fully satisfied or finished, I thought I would post the result so far.

One of the most enjoyable events in 2014 was a September trip to Detroit. At the time I had a print in an exhibit at Re:View Gallery in Detroit. Although I made a post about making this print, I never showed the finished result.

On the way to Detroit, I stopped in Indiana, Pennsylvania and visited with metals artist Sharon Massey. Below is one of her sculptures.

There is a gallery on the campus of Indiana University of Pennsylvania called the Kipp Gallery. Below I am pictured standing in front of it. 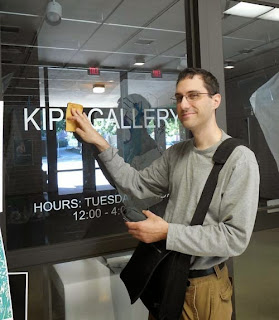 While I was pleased to see the prints by the other artists included in the group exhibit at Re:View Gallery, I was also thrilled that in the gallery’s second exhibition space was a show by my friend and mentor Timothy Van Laar. Tim was one of my graduate school professors at the University of Illinois at Urbana-Champaign. While at UIUC, at the turn of the millennium, Tim was making small scale abstract paintings. I loved the way bits of color jumped out of these paintings. It was nice to see in this exhibit the continued sensitive but certain handling of paint and mark. While the paintings remained mysterious (answers are not given but the clues are numerous), content was introduced that feels personal and gives a sense of warmth. Below are several images from the exhibit.

On the return trip from Detroit I had the chance to visit Chad Andrews. Chad is artist friend who lives in Williamsport, Pennsylvania. Andrews makes prints but his work also stretches into painting and sculptural drawings. Below is a view of six of his “Black Cat” drawings in progress at his studio in the Pajama Factory building.

After such an event filled break, I was sad to return home. Now that it is January, I also miss the colors, warmth, and smells of late summer/early fall. Below is an image from Hanna Farm where Chad and his family live. I have to sigh a bit here but I am full. Although I could not pack all of my experiences from the Detroit trip into this post, at least for me, the smorgasbord idea worked.