Currently, I am taking digital design classes at Bucks County Community College. Numerous prints are hung in one of my classrooms below the library. After observing the various styles and techniques represented, I noticed a print that looked familiar and seemed to be part of a series. I had seen another print that looked very similar on another part of the campus. Upon closer inspection I realized that the print found in my classroom and the other print I had seen were made by Pamela DeLaura.

I met Pamela on a trip to Detroit. She is a Professor of Printmaking at Wayne State University in Detroit. I sent her an email to confirm it was her work. She was surprised because it turns out the work came from her time as a graduate student at Temple University. She was not sure how the work became a part of the college collection but was pleased to know it fell into good hands. 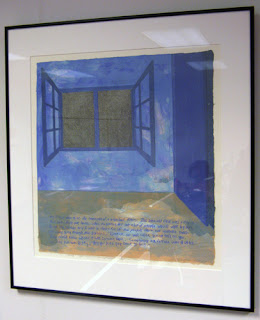 The print I witnessed (seen above with some glare on the glass) is an interior with writing visible as part of the printed image. The writing describes what she saw out of her window when she was a child.

Pamela’s prints at Bucks County Community College seem to foreshadow her later work that depicts the form of a house filled with reminders and symbolic information. Below is an image of a more recent print by DeLuara that was included in a national print exhibit at Artlink in Fort Wayne, Indiana. Having lived for three years in the Midwest, I know that Artlink has been very active in support of contemporary art and printmaking. So, all is well. What was lost has now been found. 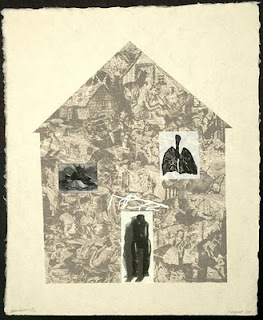