This summer I have traveled from Pennsylvania (near Philadelphia) to Michigan. I am teaching in the summer program at Interlochen Center for the arts. Interlochen is in Northwest Michigan, near Traverse City. On the way there, I stopped in Williamsport, Pennsylvania to visit the artist Chad Andrews. Chad has been an early tenant in the Pajama Factory. The Pajama Factory is a building that holds artist studios and performance space. It is owned by Mark Winkelman who is an architect from New York City. 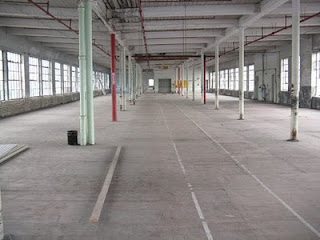 This floor of the Pajama Factory has yet to be developed.

I have seen other cities convert old factory buildings into studios (e.g., the Crane Building in Philadelphia or the Goggle Works in Reading, PA) but I have never seen a building this large with so much potential. This makes me wonder if projects like the Pajama Factory will have a greater impact on the art we see in the future? As the internet has made images of artists’ work more accessible and art fairs have made it easier for galleries to make sales in multiple markets, will artists seek out these new centers where the rent is relatively inexpensive compared to big cities? One of the smart choices that the Pajama factory has made was to start an artist residency program. This allows young artists to consider being an artist in a less than obvious place. 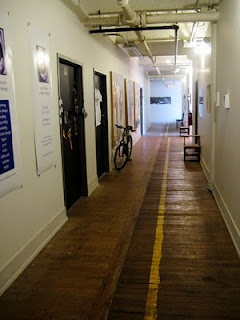 A renovated floor with new studios.

After touring the building with Chad Andrews, I began to feel that another advantage to a facility of this kind is that resources can be consolidated. For example, Andrews has refurbished several printing presses and just opened a printmaking workshop akin to Second State Press (located in the Crane Building, Phila. PA). So far Andrews has signed up several talented local artists (e.g., Jeremiah Johnson and Lori Crossley) for membership and access to his print shop. Only time will tell how large projects like the Pajama Factory will work. However, I feel a wider range of studio options will only benefit to the artists of the the future. 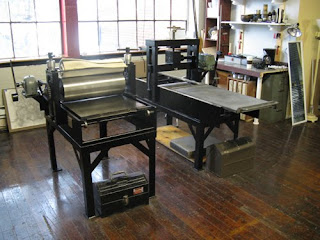