Two years ago I started a painting (acrylic on canvas) that was to be dominated by the chroma white. Initially, I was inspired by the abstract paintings of Robert Ryman. Ryman is known to use an abundance of white. Rather than making an abstract painting, I wanted to paint a boat I called the “Arkadelphia” making its way to Anchorage, Alaska. My painting was to depicted extreme cold through extreme white.

As I started to paint, I quickly realized that what appeared to be white on the palette no longer looked white on the canvas. Any little bit of color mixed with white had a profoundly colorful effect when placed on my canvas and compared with other more pure whites. I found that my image began to suffer from two flaws: either I made it too white and the imagery became difficult to see or I added too much color and then it was no longer dominated by white paint.

Not knowing how to proceed, I left the painting alone for two years and this June, after what I consider a long detour, I began to work on it again. Forgetting about my original objective, I began painting portraits inside the boat. Later, as I worked I tried to make these portraits whiter and concentrate on cool colors (blues and greens).

After working on the painting for a couple of days, I arrived at a point of decision again. Rather than continue and obliterate the image with more white, instead I stopped. This is the point at which I dropped anchor and the painting remained still. This metaphor of “dropping anchor” became an apt description and I wondered if the city of Anchorage was founded in a similarly specific and arbitrary way. After finishing this not so white painting (see the image below), I wondered if I would ever successfully make a painting truly dominated by the color white. Perhaps this future painting will have to depict a scene in route to Antarctica. 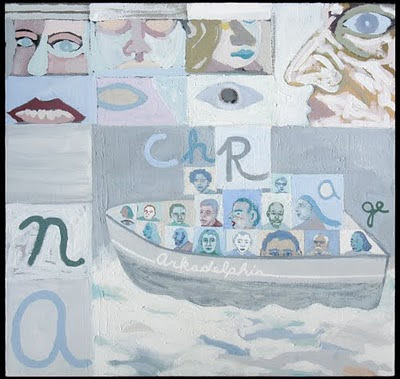