The first time I saw Ellsworth Kelly’s paintings/sculptures I was a high school student visiting Washington DC. The work was direct and palpable. To me the paintings seemed monolithic and akin to the blunt but elegant geometry of the Egyptian Pyramids. I did not know what to make of it. The fact that the work had an author seemed irrelevant. The name Ellsworth Kelly seemed fictional, like a symbol rather than a person I could know. Kelly Ellsworth seemed more accurate. While more informed, years later these feelings lingered. The exact meaning of the shape and color does not hide (there is little attempt at illusion). This caused a mix of pleasure and consternation. While I knew who made the work, color and purity does not have an author.

Now that Kelly has passed away, I am confronted with the question of whether biography matters? I learned that he served in the military and that he studied in Paris. I enjoyed seeing images of him and his studio (here is his New York Times obituary and a recent lecture). With this knowledge, he became a figure of greater depth. While I will never know Ellsworth Kelly personally, I will live with the shapes and colors he fashioned. Kelly’s paintings and sculptures are built from math and precise chroma, but they are also breath. Since I only have pictures, It would be nice to go to Egypt and see if my analogy holds true. However, judging from afar I think there is room to make this connection.

Lately, I have been thinking about how to maximizing visual exploration. When I was younger I felt I had more time to explore. How does one squeeze extra into less time? What kind of drawing best gets to the heart of a subject quickly and yields new insight? These questions caused me to think more about the thumbnail sketch.

As a student I dreaded thumbnail drawing and sensed many of my peers felt a similar way. These drawings often looked unsubstantial. It seemed to be about getting an idea out with little resolution. No matter how good the draftsman, I found the drawings fundamentally lacking. Even the masters most gestural drawings seem larger and more directed. This caused me to re-examine Leonardo da Vinci’s drawings. I tried to find the more wobbly and expedient looking drawings. I was struck how he could focus on the action of phenomena such as the movement of water (shown above) as well as how he would doggedly pursue a subject (e.g. as seen in the studies for the Trivulzio Monument). Da Vinci’s sketchbook becomes a symbol of monumental knowledge.

Leonardo set a high bar for quality in a drawing journal. Perhaps for this reason, many of those artistically inclined have a drive to make the sketchbook an impressive object. The authority of the book as a form may give rise to the feeling that it must be filled in a spectacular way (leading viewers to continue to turn pages). For me this approach has been problematic. While the sketchbook is useful, it was not a format I wanted to invest a large amount of energy, and at times the thought of hundreds of blank pages felt like a trap.

Recently, I have been more devoted to digital drawing. It is appealing because elements can be shifted, re-arranged, and colors can be tested and altered while different versions may be saved. I enjoy the freedom this allows. However, I have found that the little tag sized drawings have a place. The thumbnail drawing does not require a book, special paper, or almost any other kind of barrier between the mind and hand.

One of the benefits of experience is that one is able to evolve past earlier biases. I held on to a prior assumption that thumbnails sketches were not colorful. Perhaps this is because color has a greater psychological connection with painting. Below are a collection of little drawings. While drawing quickly, here I labored in a way I had not previously. The marker became like a brush and in each drawing something new was discovered. While the discoveries did not seem monumental, my thinking was shifted, I found little surprises, and I was able to see potential. Perhaps this is like Leonardo’s water study, at the time it was made his sketch may not have seemed like much. However, the drawing did lead Leonardo further down the river toward wider deeper currents. 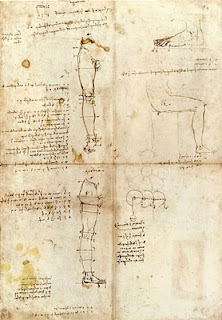 LeonardoVinci (1452-1519) is perhaps the artist most identified with science. The drawing above by Leonardo demonstrates his interest in proportion. Proportional study was critical to science during Leonardo’s lifetime because a standard system of measurement did not exist. Systems of measurements often varied from city to city (See Fritjof Capra’s excellent book The Science of Leonardo page 169).

Since the renaissance, technology has more often than not allowed artists and scientists to drift apart. There is still the need to illustrate, graph, and describe science with traditional artists tools. However, In the nineteenth and twentieth century a dramatic increase in scientific invention and information has ushered in an age of specialization where scientific understanding is no longer dependent on the artist’s power to observe and record. Electron microscopes, x-rays, and cameras small enough to be inserted in the body are now allowing scientists, engineers, and doctors to see in enhanced ways.

Although most artists are not deeply engaged in science and most scientists don’t have time to become full time artists, the two fields of study share many common aspects. For instance, both disciplines are likely to begin with studies or tests, comparison is key to both scientific and artistic analysis, perspective and observation remain critical, and finally imagination and creative thinking is essential to scientific and artistic development.

Art involves a study of life as it relates to the senses and intellect. So, we should see some connections between art and the techniques used for investigating our universe (scientific method). Art remains capable of presenting scientific findings in unique ways. Art can also provide a humanistic context for science that is capable of critiquing mankind’s use of science.

Below are examples of art that describe, critique, and presents science in a variety of ways. What is art and what is science can often be hard to separate. Notably, my initial inspiration for this post was a contest and exhibit titled The Art of Science that students at Princeton University take part in annually. The contest challenges students, who study a range of subjects, to consider science as art and art as science. 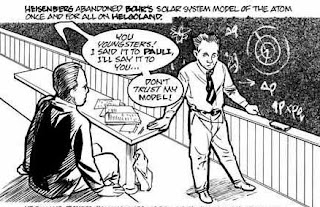 National public Radio had a series called “Where Science Meets Art” and one example from this series involves science told through comics. The artwork above is by Leland Purvis and Jay Hosler. 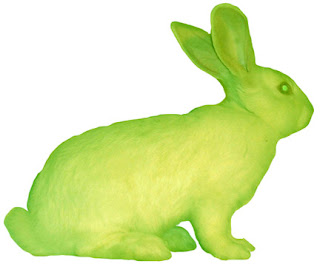 Based on study by Niccolo Fontana Tartaglia (1499/1500 – 1557) this illustration exhibits the relationship between geometric analysis, physics, and canon fire.

Galileo Galilei (1564-1642) said “Mathematics is the language with which God has written the universe.” This image is from Galileo’s Dialogues. 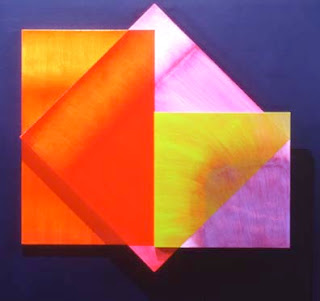 Dorothea Rockburne‘s (born 1932) work has also been inspired by a study of geometry. Above is her work: <Pascal’s Provincial Letters,

architecture (4) art history (3) color theory (1) digital arts (3) drawing (12) flowers (1) icons (1) painting (6) printmaking (2) science (1) sculpture (2) vector graphics (4) watercolor (3)
Share this Article
Email sent!
This website uses cookies. Cookies are used to personalise content, to provide social media features, and to analyse site traffic. Information is also shared about your use of this site with our social media and analytics partners who may combine it with other information that you’ve provided to them.OkNo