In March I flew to St. Louis and then in April I drove from Pennsylvania to Chicago. Between the St. Louis and Chicago trips I also visited New York and Philadelphia. Given this recent movement, I felt it would be worthwhile to organize and show some of the highlights. 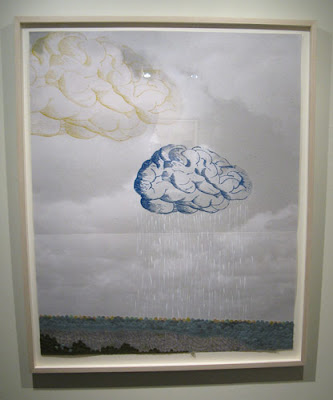 Above is a print by St. Louis artists Gina Alvarez and Jana Harper. I was in St. Louis for the Southern Graphics Conference and Alvarez and Harper’s collaborative print series was on exhibit at the Sheldon Art Gallery. The prints were inspired by a child’s notebook of poems made by a relative of Alvarez. I found it fascinating to see how and when synergy occurred between the artists. 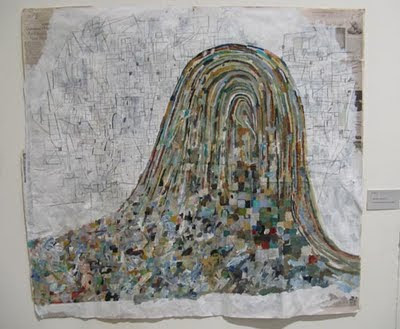 This April, I attended the opening of the Tyler School of Art alumni works on paper exhibit at the Crane Arts building in Philadelphia. The painting/drawing seen above by Mark Mahosky was created on segments of newspaper. Here parts of stories and captions show through the paint. This provides a compelling relationship between the ephemeral nature of the paper and the more permanent associations of painting. I enjoy the lumpy form of greys and muted colors that the painting creates. The lump and its grungy associations in part reminded me of Philip Guston paintings. 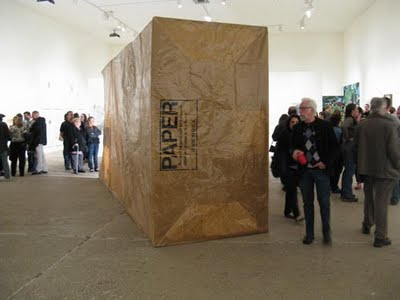 As a part of the alumini exhibit Chris Golas created a performance where he draws himself out of a giant paper bag. The performance seemed at once fun, exhausting for the artist, and a daunting challenge. At its heart art is step by step and in a way if broken down into its elements it can seem simple. However, what worked about this installation/performance is that Golas was able to make the simple steps both grand and human. The artist brought vision, and energy to the process. Thus, transforming the simple steps into ideas and feelings that are complex and worthy of lengthy consideration. 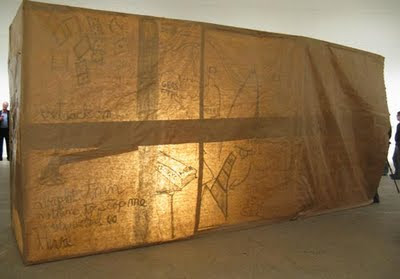 Below Chris Golas makes his way out of the bag. Even while choosing a difficult bag, Golas proves, if one is willful, one will make it out of the bag. 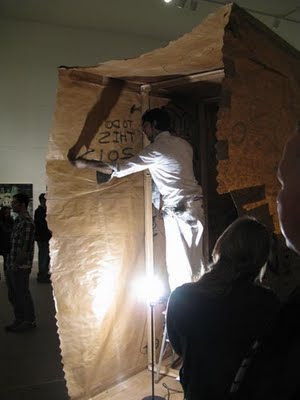 Later in April I drove to Chicago. Here I saw the Jim Nutt exhibit at the Museum of Contemporary art. While taking a break at the museum, I noticed the wonderful stone garden (seen below) designed by Sol Lewitt. I enjoyed how either weather, people, or small animals displaced some of the stones making Sol Lewitt’s complete system of vertical, horizontal, and diagonals a little bit imperfect. 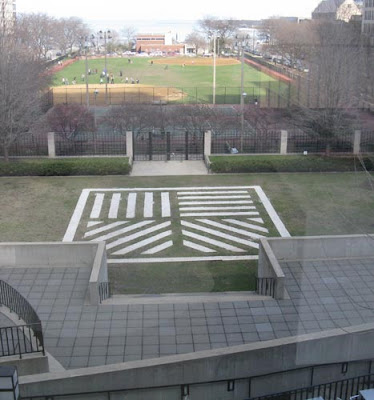 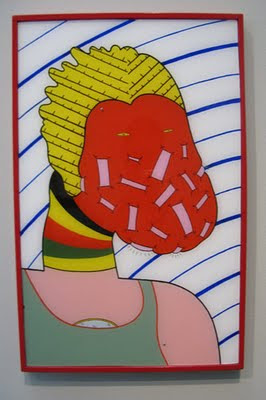 Above is an early painting by Jim Nutt. Here I learned that he employed a technique used by graphic artists for pinball machines. Nutt would use a detailed sketch and place plexiglass over it. Then he would begin by painting details directly on the glass. Subsequently, he would layer the more general parts. Finally, the painted plexiglass would be mounted in a frame and the non-painted side would face outward. 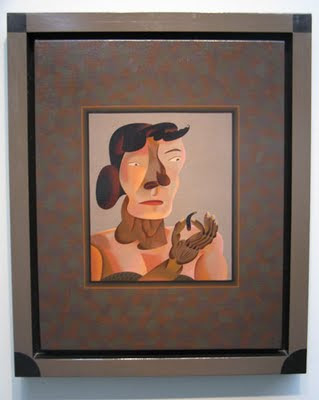 The work above shows one of Nutt’s later paintings. Through a video playing in the gallery, I learned that there was a lot left unseen in the exhibit because Jim Nutt often paints messages and images on the backs of the paintings. The work on the verso side tends to be addressed to the owners or handlers of the painting. 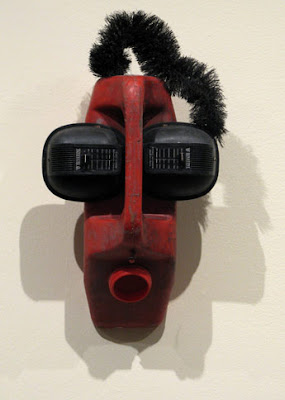 Although I visited New York City twice this spring, I did not take many pictures. A highlight from the first trip was a visit to the exhibit Reconfiguring an African Icon: Odes to the Mask by Modern and Contemporary Artists from Three Continents at the Metropolitan Museum of Art. Above is an example of work by Romuald Hazoumé (Beninese, b. 1962. Ear Splitting, 1999. Plastic can, brush, speakers). These masks often present pathos and humor in a way similar to the inventive portraits by Jim Nutt.