On April 4th, 2008, I quickly made a print using the headlines that were in the paper that day. I considered the headlines as thought bubbles for the day. It was a challenge to make an image quickly in the same hasty manner that newspapers have to shape stories everyday. I thought of my image as a kind of time capsule. Although the news is about current events, it is also partly about remembering. Each year, there is a headline on April 4th about the sorrowful day in 1968 when Martin Luther King was killed. Regardless of how important events appeared, the other news items of April 4th, 2008 now seem like small parts in a stream of information. 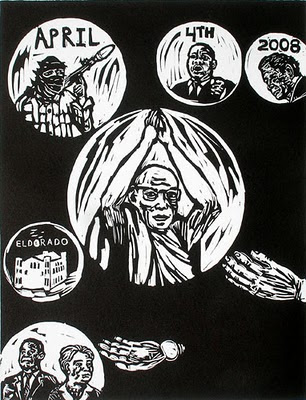