(For more information about the “Viewfinder Project” click here.)

I met Joshua Mosley at an opening at the Fleisher Art Memorial in 2005. Since then, I have not seen him often but have kept in contact (Mosley is a Professor of Animation at the University of Pennsylvania). I sent him a request to contribute to the “Viewfinder Project” and received a prompt response and result. At first I didn’t know what to think because he had scanned and flipped the image I had made. I received a mirror image printed on the back of the “Viewfinder” card I had sent him. It felt as if he had sent the print back to stare at me in the way one looks at a mirror.

Overtime Mosley’s adaptation has grown on me. The colors from the inkjet printer used are a little softer and have settled in the paper in a way that my oil based ink did not. As far as I can tell, Mosley’s version was printed directly on the original paper I sent. This meaning that a bleed print would be near impossible (digital printers are not equipped to print over the edges of paper). Hence, he had made an image slightly smaller with a minimal border. These differences became unnoticeable once I scanned Mosley’s image and posted it below. Unless one wants to make an appointment to see the original, viewers will have to trust it’s authenticity. Perhaps being one step removed can reveal limitations similar to those found when one looks in the mirror? However, There are times when we have to trust even when we can’t fathom the reflection. 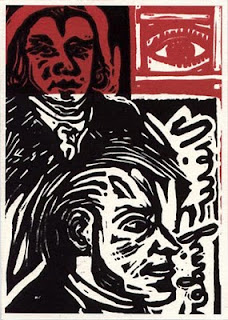 Digital Print (A Flip of Kip’s Print) by Joshua Mosley

Originally I thought Geoff Beadle’s viewfinder involved mirrors but now I am not so sure. Geoff is a painter and professor at Edinboro University of Pennsylvania who makes revealing self portraits. He is aided by mirrors and sometimes uses mirrors coupled with a photographic views. These paintings are about intently and fearlessly observing even when the view is not always flattering. However, a mastery of materials and technique present a paradox where a grittier more complex conception of beauty is possible. I found his viewfinder compelling because it is literal like Mosley’s digital print yet it also is transformative. Try as I may, I am uncertain whether light is emanating from an object being framed or whether it is some how a reflection shining off the viewfinder being held. I get the feeling that Beadle is in the photograph and is illusively revealing another self portrait. Here he is directly revealing the the tricks of his trade, namely, through camera work, the viewfinder (like that being held), as well as through lighting and reflection. 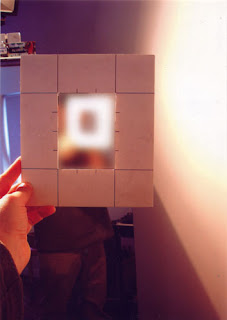 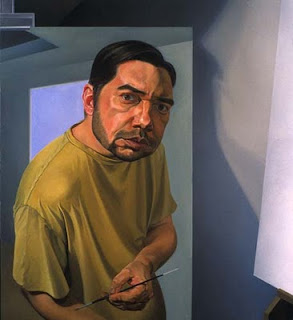