Several of the artists involved in the “Viewfinder Project”, including Katie Parry, transformed the initial “Viewfinder” print in sculptural ways. Parry built outward glueing new materials to the back of the print. Below is a view of the print after Parry had worked on it. 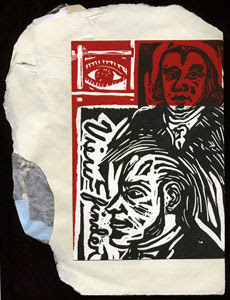 Relief print by Kip Deeds, collage by Katie Parry
On the other side of the card Katie continued to collage and made a drawing. She wrote me a descriptive note about how she arrived at the image. Initially, she imagined personalities for the figures depicted. Parry’s free association was a catalyst that ultimately led toward her own narrative thread. In many ways, Katie’s delicately constructed collage and drawing are a contrast to the more contained graphic content of the print. Parry’s written description of her drawing is almost as stirring as the artwork she made. 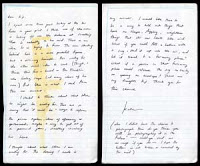 Letter from Katie Parry
Parry writes, “I would like there to be a way to hold onto things that have no shape, slippery, weightless things that stir our hearts like wind. What if you could fill a balloon with a song, send it up into the air, and let it travel to a faraway place? What if a person in that far away place could release the song as easily as opening an envelope?” 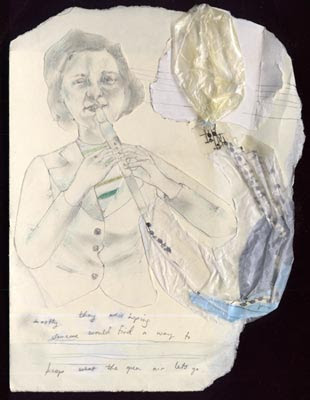 Collage and Drawing by Katie Parry
It seems Katie Parry’s view is expansive. Her process involved wandering, wondering, building outward, and thoughtfully communicating. Parry’s letter seems an extension of the drawing. One view leads to another, then action, and then dialogue.
FacebookTweetEmail

2 thoughts on “Viewfinder Continued: A Collage By Katie Parry”